Twenty years ago, a group of folks in my community joined together with a shared vision to create a rail trail. But it’s not just any trail. It’s a muscle powered trail open to folks who walk, ride bicycles or ride horses. It stretches for sixteen miles through the Zaleski State Forest, Lake Hope State Park wetlands and some small villages.

It’s called the Moonville Rail Trail, named for one of Vinton County’s most famous landmarks, the Moonville Tunnel. The trail follows an old Baltimore and Ohio rail line through sheer wilderness. The tunnel is famous primarily for legends and stories about ghosts and hauntings. It’s also a super cool old railroad tunnel.

In fact, many people come just to see the tunnel. They park, walk the short distance to the tunnel, nose around a bit and leave.

Sadly, they’re missing the best part. I was there with a friend after work last night. We parked at Moonville and then walked the approximate two miles to another tunnel. This one is called King’s Hollow Tunnel or sometimes King’s Switch.

First of all, I want to say how amazed I am at the work the Moonville Rail Trail Association has accomplished. When the railroad pulled out of this stretch years ago, they took out everything including the bridges which cross ravines as well as the incredibly twisty Raccoon Creek.

Having new bridges placed was imperative to making this rail trail usable. This is not a wealthy community so they have relied on grants, fundraisers and donations of blood, sweat and tears from a very small core group of people. You cross several of their bridges in that two mile stretch between Moonville and Kings Hollow and I couldn’t help but smile every time we approached a new one. This is what can be accomplished when people unite for a common good.

This is a densely forested area with gorgeous views of the changing foliage, wetlands and stream. Plus, there are the tunnels.

The Moonville Tunnel was built in 1856 and repaired at the turn of the next century. It’s brick and very cool. It’s named for the small town that was once located here. No more than a hundred people ever lived in Moonville at one time and they were mostly miners and rail workers. There’s not much left except a cemetery, the tunnel and some tall tales. Even the foundation stones once left from old buildings have been mostly swept away by flooding or souvenir seekers. However, if you go off trail in your exploration you might stumble into an old cellar or two so be careful.

Today the tunnel is largely covered in graffiti. Visiting here has long been a rite of passage for young people, including Ohio University students, to visit at night. They commonly leave their mark.

Walk a couple of miles east of Moonville to find the King’s Hollow Tunnel. What makes it special is that it’s wood. It’s a 120 foot long wooden tunnel carved through rock. I love the way the rock juts out overhead so you can truly see what the builders were up against all those years ago.

This tunnel has a distinct smell. It smells musty and old like old wood and oil. You can actually smell the tunnel before you can see it. Also, the temperature drops at least ten degrees as you approach. Sadly, graffiti artists have found this one too.

You can drive to this tunnel but then you would miss out on the glorious views along the walk and the true peace and quiet that you don’t find many places. Speaking of quiet, don’t expect much cell service.

Click here to see some more pictures from another King’s Hollow visit. Read more about the Rail Trail and get directions to Moonville at the Vinton County CVB site. You can also take a trail ride to Moonville at Uncle Buck’s Riding Stable. I did that last year and wrote about it here! Finally, I want to mention they typically have a fun event at Moonville in October. It’s cancelled this year because of Covid spikes in Ohio but they’ve already announced the 2022 date. Read about that event here.

Check back. I’ll tell you what I know about Moonville’s ghosts soon. 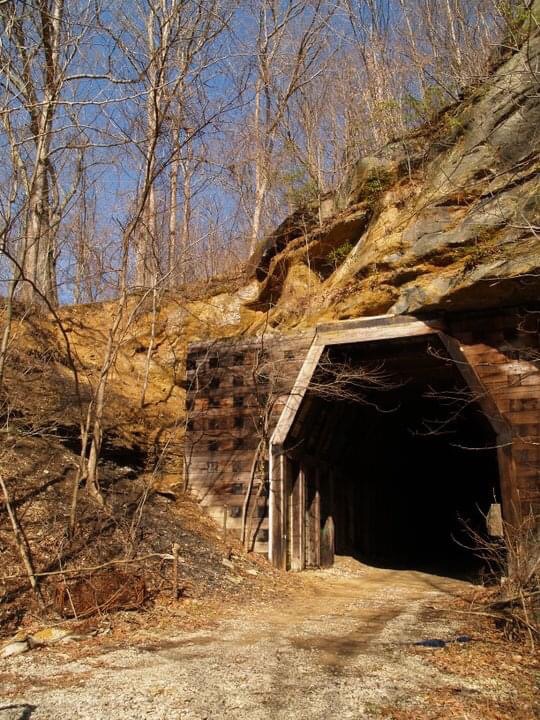 There are some interesting old railroad tunnels in southern Ohio including this one – King Tunnel or King Hollow Tunnel.

Built in 1855 by the Marietta and Cincinnati Railroad, this stretch of rail line later became part of the Baltimore and Ohio before seeing its demise in the late eighties under CSX ownership. 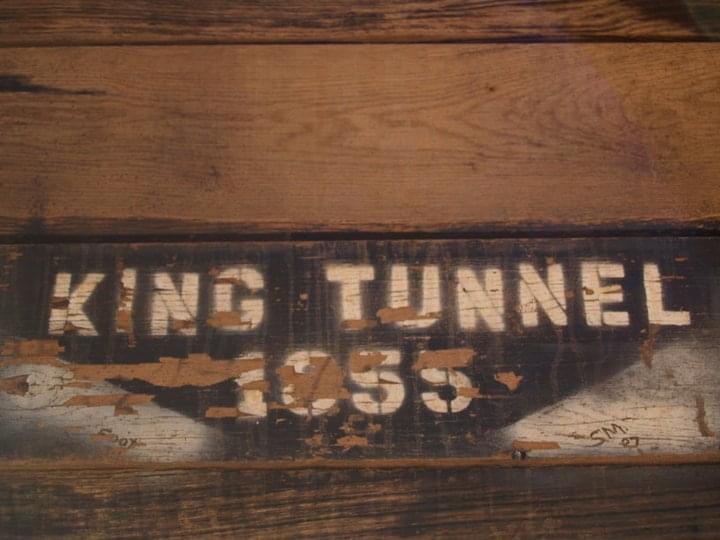 It is now surrounded by the Zaleski State Forest, close to the town of Mineral and just a few miles from the famed Moonville Tunnel. 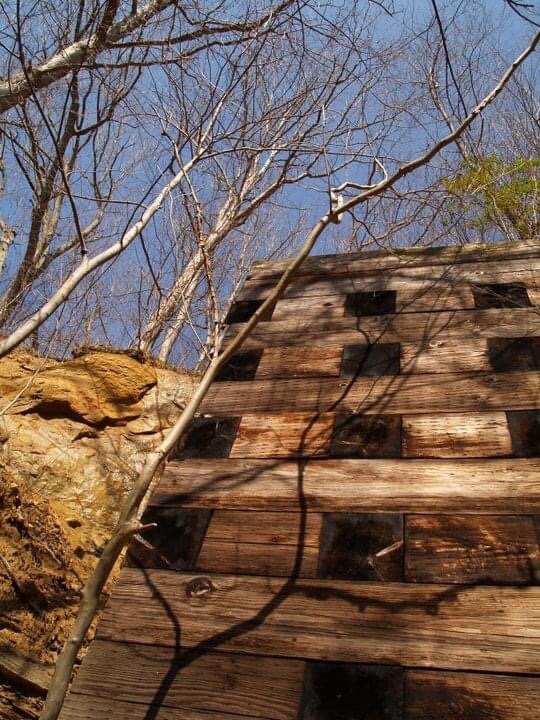 That’s not something you see every day.

Here’s something else you don’t see every day. This image is on file at the Southeast Ohio History Center in Athens. 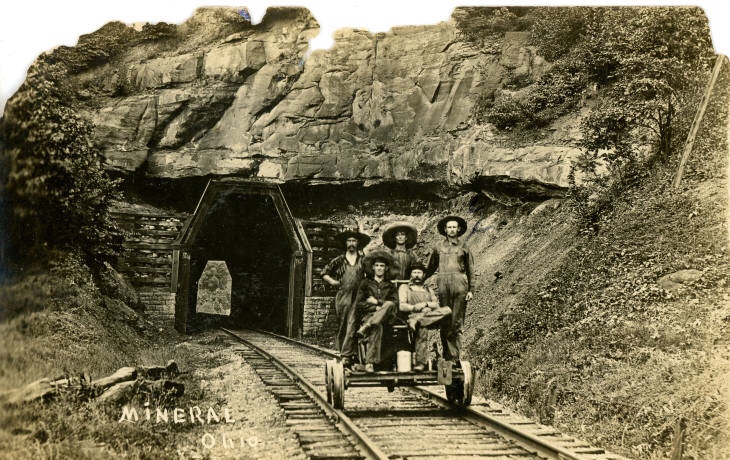 Want to go? You can park at the intersection of Rockcamp Road and King Hollow Trail. I think it’s about a half mile hike to the tunnel. If you go in spring, look for wildflowers along the way. I haven’t been there in a few years but I recall it being quite pretty. 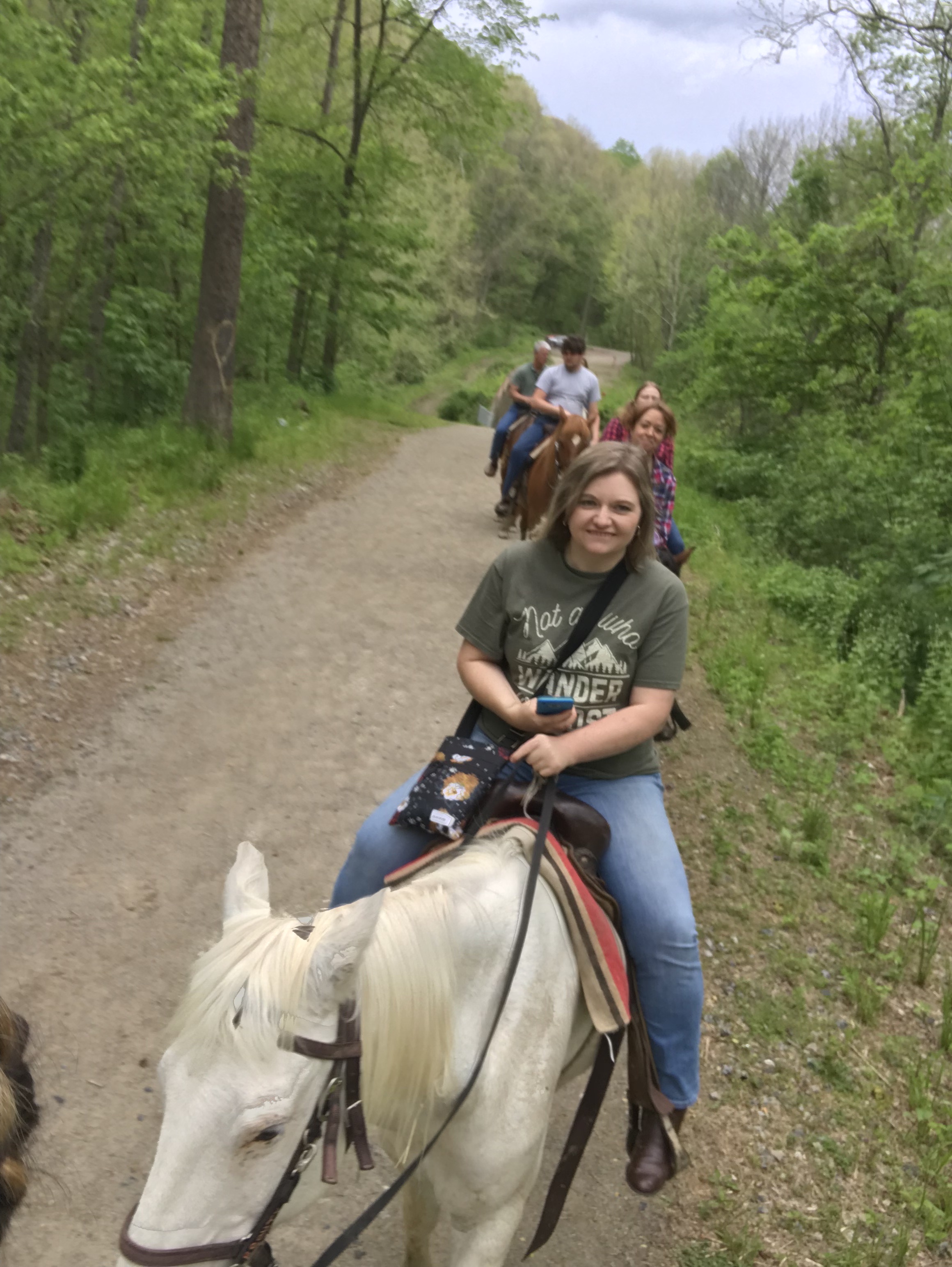 I checked off one of my Post Covid Bucket List items with a trail ride at Uncle Buck’s Riding Stable.

Once upon a time, I was the marketing director for my community and often sent visitors to Uncle Buck’s but somehow never made it out for a ride.

This was my first time on a horse and I’m sure it wasn’t very pretty but our guides were patient and super to give clear, helpful guidance.

We took a trail through the beautiful Zaleski State Forest to the infamous and possibly haunted Moonville Tunnel. The trail weaves through peaceful forest and is simply lovely.

I’m a hiker but it was fun to see the woods from a different perspective. 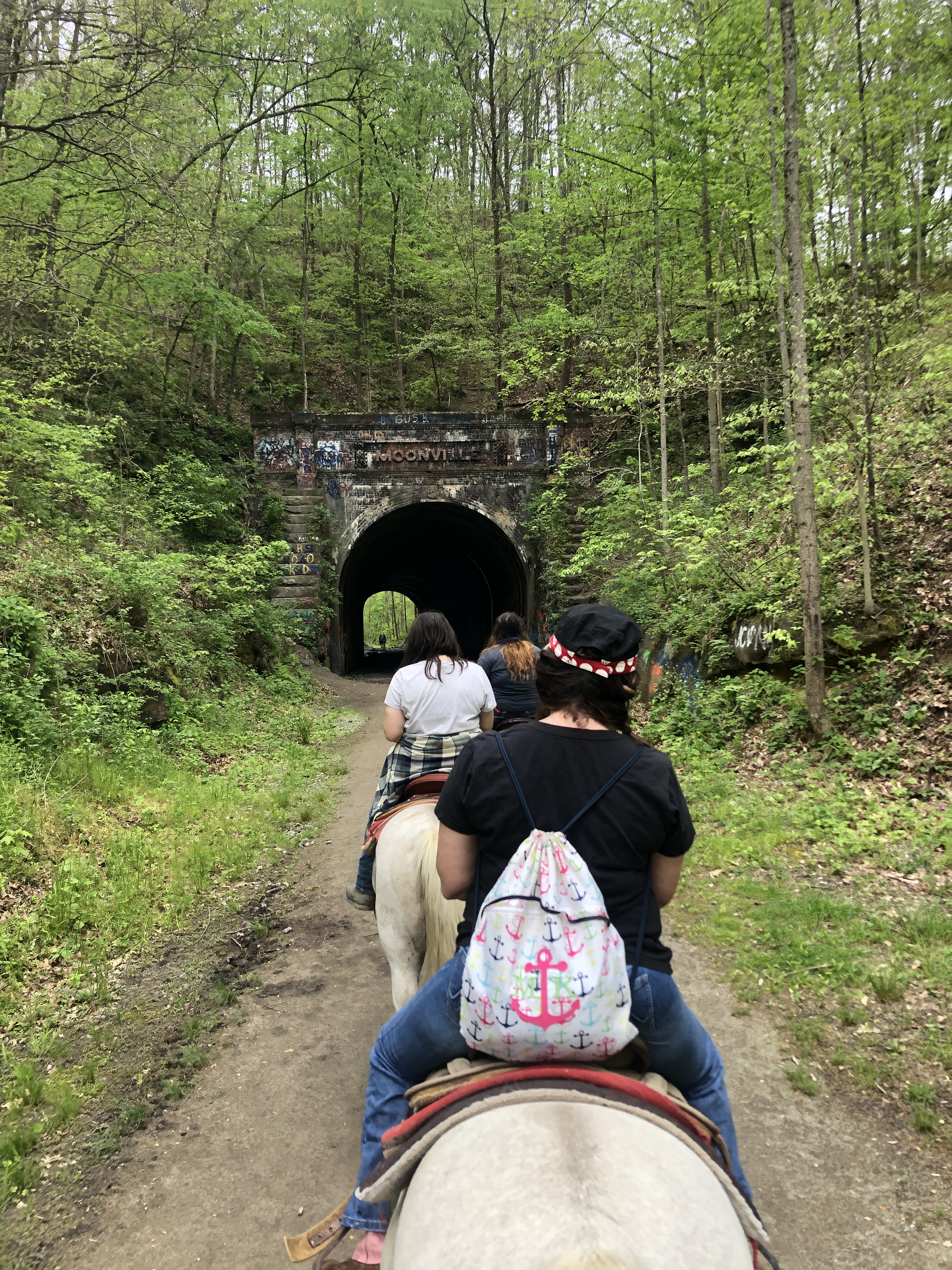 My horse was gentle and so familiar with the trail I’m sure she wished I would just relax and let her do her job.

It’s hard for me to be a passenger in a car or to watch while someone else does something I know how to do. I fight those tendencies but it’s hard to squelch those control issues.

It was unfamiliar territory being on an animal that I didn’t really know how to control or communicate with. Adding in my timidness about handling her because I didn’t want to hurt her created a sort of bad combination but things worked out anyway. It’s probably a kind of personal growth that I’m able to acknowledge not doing something well and being ok with it.

I would absolutely go back to Uncle Buck’s and maybe next time feel better equipped. At this point, I’m just grateful that I didn’t fall off given that I’m neither graceful nor coordinated!

I do almost everything by myself but was glad to be there with friendly company. I was with a friend, her niece and another friend. None of us cared about being uncoordinated and silly in front of each other and that made it easier. 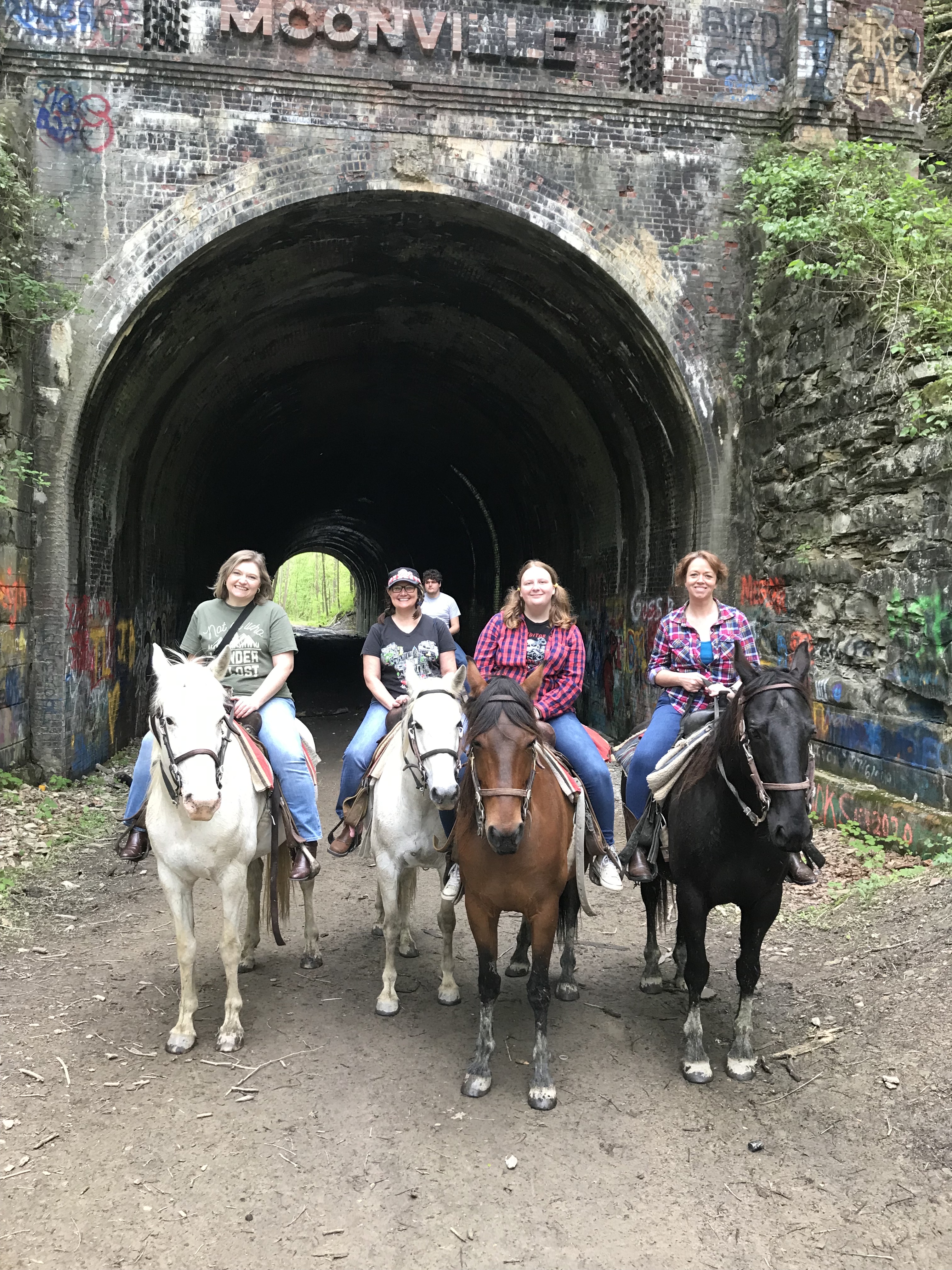 Want to take a trail ride at Uncle Buck’s? I hope you will! They’re great folks who provide a fun service for all ages.

They’re a seasonal business that has lost a couple of months worth of income. Let’s help them catch up! Visit them online for details. You can also find them on Facebook.

If not this small business, look around your community for small businesses that you can support. Remember that those big box stores and many online retailers have been making money hand over fist during the pandemic. They’re doing great. The chain restaurants will survive. The conglomerates will be fine.

The mom and pop stores, restaurants and service providers need you. They need all of us. Let’s give ’em some business! Have a favorite small business you want to support? Tell me about it! 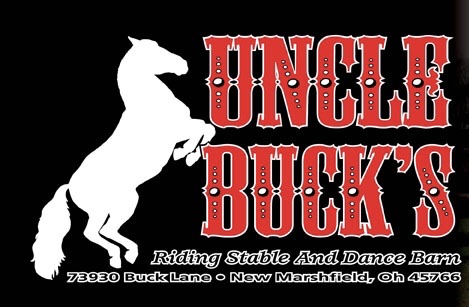 The first in the series of things I want to do when we’re free again is to take a trail ride at Uncle Buck’s Riding Stable and Dance Barn. I’ve known the owner for many years but somehow have never made it out for a ride.

His name is Dave but everyone just calls him Uncle Buck. He’s a good community minded man who loves his horses and who makes pretty music with a couple of local bands.

They do a few different rides but I have my eye one one that goes through the Zaleski State Forest to the Moonville Tunnel.

Moonville is a ghost town and the tunnel is said to be haunted. A rail trail has been built in the area and goes right through the tunnel. The state forest is expansive and is beautiful especially in spring and fall. I’ve been to Moonville and to these woods many times but never on a horse!

Uncle Buck’s draws a large number of tourists but they take out small groups so you still have an intimate and authentic experience. Once upon a time I ran the county visitors’ center so I’ve sent a lot of people their way over the years. Yet I’ve never done a trail ride.

Maybe I’ll get some friends together or I may go solo. Either way, this is the year I go support my friend’s business.

Want to read about Uncle Buck’s? If you’re ever in southern Ohio, I’m sure they’d love to get you out on the trail!  Read about them here.