We had some excitement last night, waiting for severe weather to move through the area. We were under a tornado watch for most of the evening until it got ramped up to a tornado warning.

Everything turned out fine where I live but it sounds like a tornado touched down in an area where I often hike and where I had intended to hike last night.

When my phone started buzzing with notice to take cover, I packed up Scout in his backpack carrier and we headed to my parents house where I spent the evening in a small bathroom with my folks, a German Shepherd named Fritz, and Scout’s carrier strapped to me while I relaxed in the bathtub.

Fritz and Scout didn’t understand what was happening but they were troopers. The other three cats who live with my parents hid out under the bed.

As of this writing, I’m unclear as to the damage elsewhere but the power outage map is pretty comprehensive.

Since I tend to find humor at inappropriate moments, I’ll tell you that I had to giggle at one point. I went to meet a tornado dressed in hiking clothes and a sun hat with my cat and a big purse filled with snacks, water, a book and my journal.

Clearly, my priorities are straight. At least I had a book and cat.

When the tornado warning was downgraded to a severe thunderstorm warning, Scout and I headed home to our dark house. While we don’t know how long the power will be out, I was happy to just have a home to return to when others may not be so lucky.

It was then that I saw a good omen- a rainbow so large I couldn’t capture it all in one photo.

What’s the old saying? Don’t fear the storm for the rainbow’s never far behind.

“The more I traveled, the more I realized that fear makes strangers of people who should be friends.” Shirley MacLaine

My friend sits in the car at the end of this rainbow in Wyoming two summers ago. Travel, learn, grow and stop being afraid. The good outnumbers the bad.

You won’t regret it.

Here’s another reason why you should look up and all around.

This is a small space between buildings in downtown Lancaster. I think the installation is gone now but it was such a treat to walk through and many people didn’t even know it existed because they simply weren’t aware of their surroundings.

It was like a special secret for the aware.

What secrets have you found in your world?

Sometimes when you miss your goals, something even better happens.

The day we attempted to climb Laramie Peak and were forced out by a nasty storm, we encountered something we would’ve missed had we made it to the top.

We saw this beautiful rainbow. My friend Johnna took the above picture. It was exciting to see both ends and it was all the more impressive against the big Wyoming sky.

So while we hated not making that last mile up the mountain, this was a fantastic reward for the sacrifice. And it’s a timely reminder that when things don’t work out as we wish, we may be getting set up for something even better.

That missed job opportunity? There could be an even better career change waiting for you next year.

That rain shower slowed us down and turned us around so we could see something truly spectacular and I am grateful. And I’m trying to be grateful for all the other stuff that I hope to someday learn were blessings in disguise.

Have a good day and go looking for what’s over the rainbow, my friends. You deserve it. 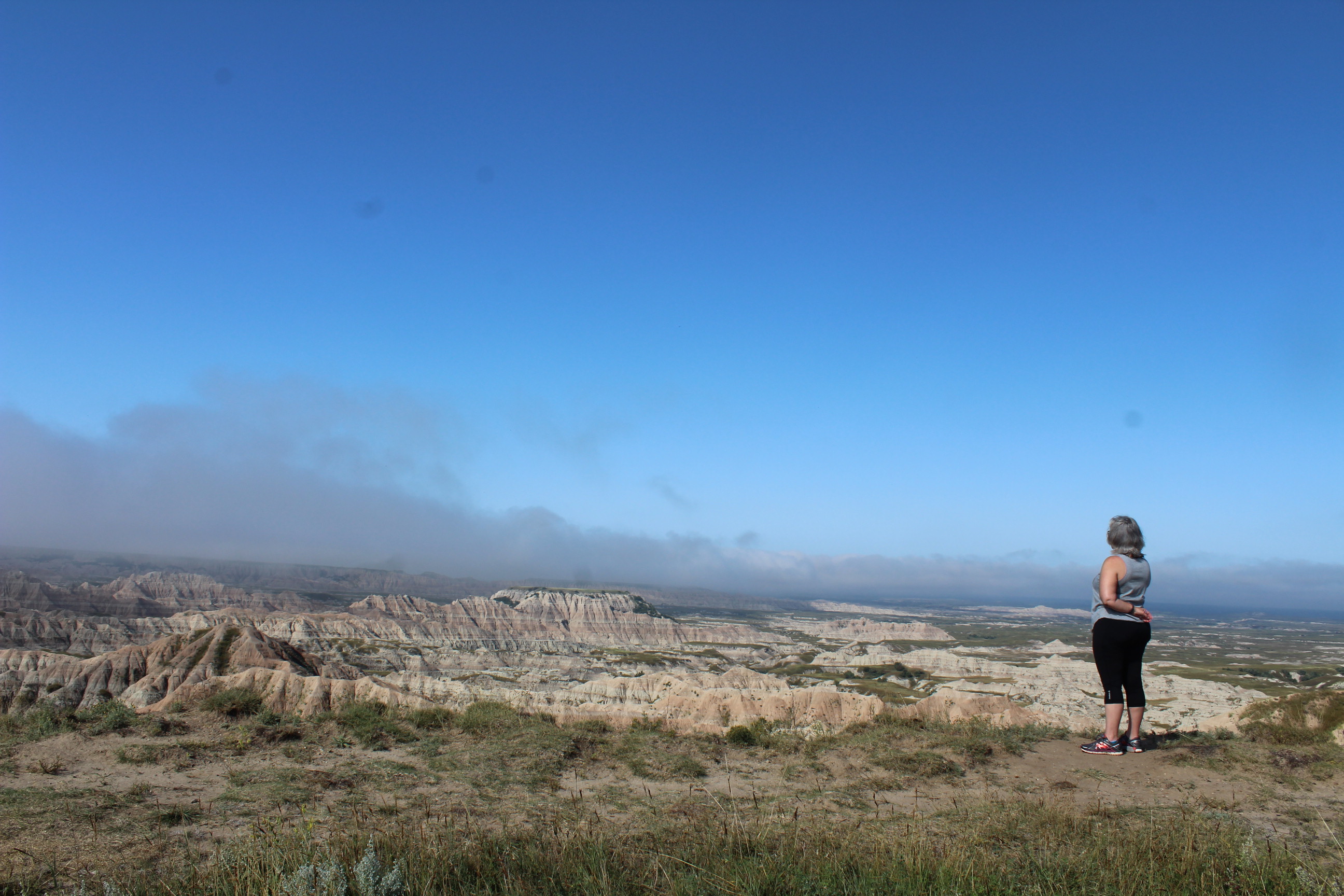 The best kind of vacation is the one that stretches your horizons. It teaches you something about a place and its people.  You come home feeling like your world view has shifted, if only just a bit.

It’s a huge world out there and I haven’t seen most of it so when my pal Johnna suggested that I visit her in Wyoming and we journey over to South Dakota for some adventure, I was ready to go.

We spent a couple of days exploring her neck of the woods and then road tripped over to South Dakota’s Black Hills. The vacation was amazing, even if everything didn’t go as planned.

Truth be told, we only hit a few of the highlights and didn’t do everything we had hoped. There’s a lot to see and never enough hours in the day to do it. But we had a great time – partly because we did fun stuff and partly because the company was great.

As I sift through pictures and souvenirs, it becomes increasingly clear that there are many, many stories to tell from this trip. The plan is to begin sharing these tales, one at a time for as long as you’re willing to keep reading.

This trip taught me about the Lakota people and some of their traditions. I learned about how our government prohibited by law many aspects of religions and sacred ceremonies of native peoples. This impacted Native Americans, Eskimos and Hawaiians and it was within my lifetime that our government passed an act granting them the religious freedoms they deserve.

This is something that I want to revisit another day and there is nice imagery to go with it.

It taught me that sometimes a tourist trap is just a tourist trap but also gave me hope that there could be a breathtaking rainbow around the next bend.

I also learned about the rural nature of Wyoming and some of the challenges that come with living here. The western landscape is about as foreign as the surface of the moon compared to my wooded southern Ohio. The big skies, various shades of browns and the sparseness of the landscape lend a unique beauty that you won’t find most places.

Plus there were some good restaurants, interesting people and beautiful sights along the way that made each day of this adventure seem a more rewarding than the one before.

It was a great vacation so stay tuned! There’s more to come!