Mt. Rushmore was one of many stops on my western adventure last year. The site was under construction so we couldn’t get very close but it was still something fun to see. If you’re interested in learning more, click here to read the story. The Rapid City, South Dakota area has a lot to offer and a nice little regional airport if you wish to fly in. Check it out if you get a chance!

There are certain landmarks in this country that everyone should see at least once. One of those is Mt. Rushmore, a destination of my western adventure.

Mt. Rushmore is an easy drive from Rapid City, South Dakota where we stayed. There are several fun and interesting things to do in Rapid City and the vicinity including Mt. Rushmore, Badlands National Park and the Crazy Horse Memorial to name a few.

Mt. Rushmore is sort of a mess right now as a portion of the property has been torn up and is behind a chain link construction fence. You can only admire this magnificent monument from afar. 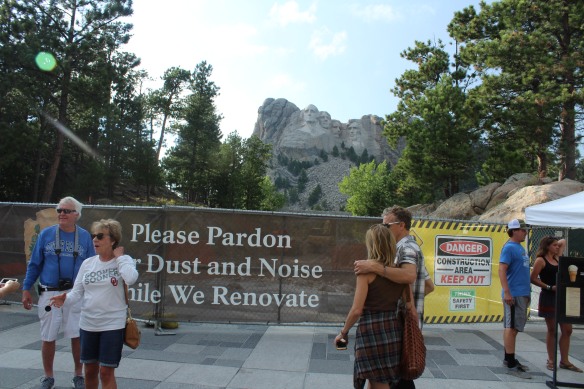 Honestly, it’s a bit smaller than I expected but impressive nonetheless. It’s incredible when you consider what can be accomplished with dynamite, jackhammers and chisels.

Portions of the monument can be seen from the road below but it’s worth the $10 parking fee to get out of the car and look around. There’s a great visitors’ center with a gift shop and ice cream shop where you can taste Thomas Jefferson’s ice cream recipe.

So many of the employees are clearly immigrants and it’s great fun to hear all the accents working at and visiting this monument to some of our nation’s great presidents. For this country girl from Appalachian Ohio, the exposure to different languages, accents and people of nationalities across the world is a treat.

If you go, know that your National Parks Pass will not help you here as that pass only covers park admissions. Mt. Rushmore is free but there is a fee for parking not covered by the pass. Never heard of the National Parks Pass? My pal Johnna, who I was traveling with, has one (it’s actually called the America the Beautiful Pass) and it’s a great deal if you plan to make many park visits in a year. Click here to learn more.

Want to know more about visiting Mt. Rushmore? You’ll find everything you need at the National Parks website!

The best kind of vacation is the one that stretches your horizons. It teaches you something about a place and its people.  You come home feeling like your world view has shifted, if only just a bit.

It’s a huge world out there and I haven’t seen most of it so when my pal Johnna suggested that I visit her in Wyoming and we journey over to South Dakota for some adventure, I was ready to go.

We spent a couple of days exploring her neck of the woods and then road tripped over to South Dakota’s Black Hills. The vacation was amazing, even if everything didn’t go as planned.

Truth be told, we only hit a few of the highlights and didn’t do everything we had hoped. There’s a lot to see and never enough hours in the day to do it. But we had a great time – partly because we did fun stuff and partly because the company was great.

As I sift through pictures and souvenirs, it becomes increasingly clear that there are many, many stories to tell from this trip. The plan is to begin sharing these tales, one at a time for as long as you’re willing to keep reading. 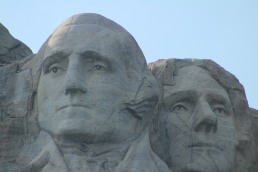 This trip taught me about the Lakota people and some of their traditions. I learned about how our government prohibited by law many aspects of religions and sacred ceremonies of native peoples. This impacted Native Americans, Eskimos and Hawaiians and it was within my lifetime that our government passed an act granting them the religious freedoms they deserve.

This is something that I want to revisit another day and there is nice imagery to go with it.

It taught me that sometimes a tourist trap is just a tourist trap but also gave me hope that there could be a breathtaking rainbow around the next bend.

I also learned about the rural nature of Wyoming and some of the challenges that come with living here. The western landscape is about as foreign as the surface of the moon compared to my wooded southern Ohio. The big skies, various shades of browns and the sparseness of the landscape lend a unique beauty that you won’t find most places.

Plus there were some good restaurants, interesting people and beautiful sights along the way that made each day of this adventure seem a more rewarding than the one before.

It was a great vacation so stay tuned! There’s more to come!