Graffiti isn’t cool but I sure did giggle when I saw this. It’s an ink doodle inside the Mill Branch Covered Bridge at the Barlow Fairgrounds. You can read about that bridge here. 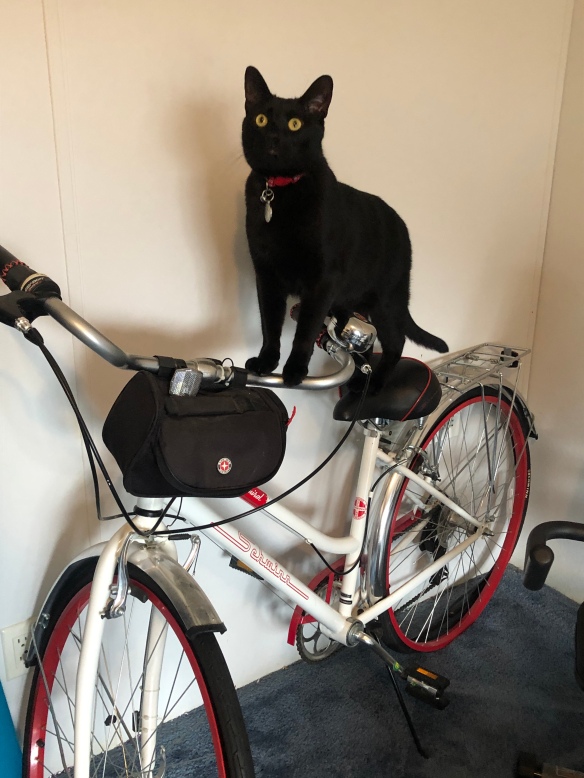 Happy Friday, everyone! We made it! Let’s all be ambitious and productive today, shall we? With any luck, we’ll roll right through without difficulty!

My energy level has been low and I have struggled to feel rested lately. One very thoughtful friend sent a special tea to help me feel better. Another sent some lotion with melatonin to aid my sleep.

On Tuesday night, I sipped tea and slathered on the lotion before falling into a deep sleep. It was pure bliss.

Well, it was bliss until 3:28 a.m. when Scout decided that it was playtime. He woke me up, running from one raucous adventure to another. I would get up and hold him, packing him around with hopes he would calm some.

I took away the things he was playing with.

That didn’t work either.

I tried taking him to bed, scratching his chin while holding him in a glorified chokehold.

I turned on the tv because he sometimes likes to watch. Turns out Barnaby Jones didn’t capture his attention either.

I eventually passed out from exhaustion while he was foraging through the bathroom trash can. When the alarm went off, he had come to bed and crawled under the blankets to sleep with his head cradled on my foot. It was sweet.

When I got up, he crawled out from under the blankets so I could make the bed. Don’t worry, he repositioned with one of his favorite blankets and went back to sleep a while. He’s pictured staring lazily at the lamp just before I took the hint and turned it off.

He typically sleeps well at night so it was a real shock. The episode was the most cat like of all the cat things he has done in a long time. I’m hopeful he sleeps well through this night.

Nothing goes on in this house without passing under his watchful eye. 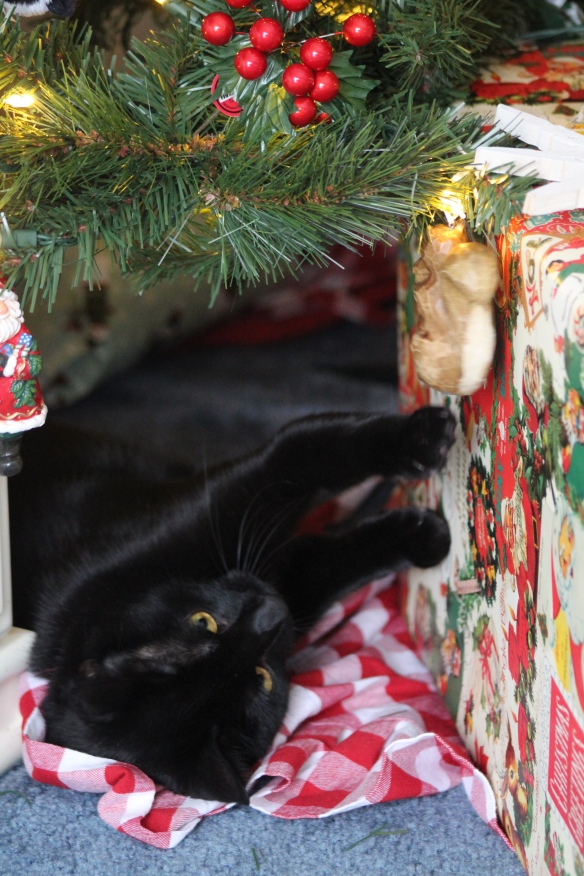 Wrapping gifts was no exception as he considers it his duty to inspect every package at least once.

He absconded with the tape and has fiddled with the packages every chance he gets. He also loves to remove ornaments from the tree so I can experience the joy of trimming the tree multiple times every day.

Santa would be lucky to have such a helper!! 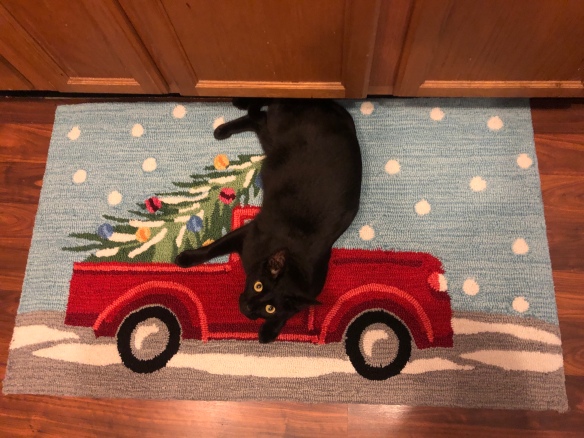 Scout was curled up with me in our reading chair last night and he looked so content that I started thinking about gratitude and cats and what he might be thankful for if he could speak.

I think this is what he would say:

Just so you know, I did not buy that rug for him but he has staked claim to the darn thing and, like everything else I own, it’s his now. 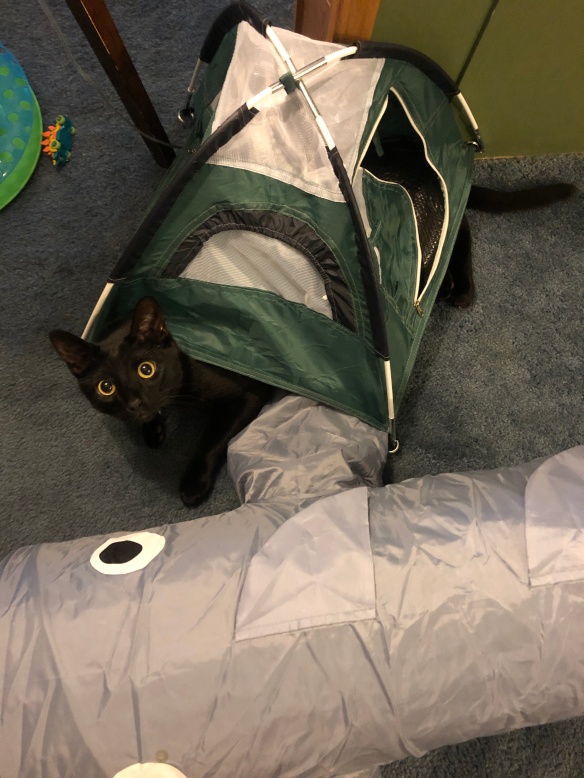 Scout likes to gather his favorite toys in one place and play with them all at one time. Here he has his Shark tunnel (best $6 ever spent), a Hot Wheels car shaped like a dinosaur, and his tent which was a gift from my coworker’s cat.

He often takes mousies into his tent and stretches out as pictured here.

It’s shocking how fast he can jump out from this position and nab your leg. It’s actually a little scary how good his reflexes are. More than anything, it’s delightful to see how happy he is playing with these things.

We all could learn something from Scout. He doesn’t need fancy new toys to be happy. His old stuff, a patch of sunlight, and the occasional wad of paper liberated from the office trash can are enough to fill his day with joy.