This turquoise suitcase came from a TJ Maxx in Salt Lake City a few years ago. As usual, I had overdone it on the souvenirs and needed something bigger to haul everything home on the return trip.

The personal item I had carried out was quite small and I found this little number was the exact maximum dimensions for my airline’s personal item allowance.

I settled on this one because it’s roomy and a different color. It would be easy to recognize in a sea of black luggage.

No one would have a suitcase like this one, right?

So I toted it back to the hotel, packed up my stuff, and happily attached this fun luggage tag to my new bag.

At the airport the next morning, I waited patiently for my bag to come down the security conveyor belt.

The first thing I noticed as I pulled it off the belt was that my cute tag had somehow come off.

The next thing I noticed was a young woman screaming at me in broken English and Spanish to let go of her grandmother’s bag.

Yes, friends. Out of all the airports in all the world, the people in line next to me had the same suitcase.

I was still clutching the bag, protecting my possessions from this screaming lunatic when I saw my bag roll by on the belt.

And yes, the tag was intact.

I swear it all happened in slow motion.

Of course, I was mortified as I let go of the stranger’s suitcase and held up my own for the other family to see. I wasn’t a thief, I said, babbling about TJ Maxx and the pretty turquoise. We just had identical suitcases!

They were not at all impressed, edging away from me to put on their shoes, still shooting dirty looks at the weirdo who tried to abscond with grandma’s worldly possessions.

I laugh about it now.

Never again will I ever enter a TSA line without this memory flaring up and causing me to study the luggage of those around me.

The decision to visit the Flying Circus at Bealeton, Va. during this road trip adventure came with another decision. How to spend Sunday morning prior to the air show?

A quick glance at the map easily answered this question. The Manassas National Battlefield Park was just a little bit out of the way en route from Winchester to the airfield at Bealeton. The park is open dusk to dawn and the visitors’ center opens at 8:30 a.m., timed perfectly for a walk around the battlefield before heading south to see all the cool planes.

If you’re a Yankee like me, you likely remember this battle from history class as the Battle of Bull Run. And technically, two battles were fought here – the first in July 1861 and the second the following year in August. The 1861 battle was the first major battle of the Civil War and a Confederate victory.

Today, the park encompasses over 5,000 acres just outside of town. There are bridal trails, hiking trails, ranger led programs, a walking tour and driving tour. The visitors’ center has an orientation film, bookstore and rangers who can help you use your time here wisely.

On the battlefield, you’ll see a home – destroyed by the battle and reconstructed to help tell the story. A small family cemetery holds the remains of the elderly woman who was bedridden inside that house. By the end of that first battle, she was dead, her home destroyed and her farmland ravaged by war.

Cannons dot the landscape along with small markers that honor the fallen and interpretive signage that outlines what went on here. A statue of Stonewall Jackson surveys the battlefield from atop his horse.

I walked the battlefield, admired the farmhouse and stood inside the footprint of the tiny home of James Robinson, a free African American man who lived here with his family. The home escaped major damage although Mr. Robinson suffered significant financial losses because of the battles fought here. He claimed more than $2,600 in property either destroyed or taken by Union soldiers. He received less than half his claim. All that’s left of the home today are the foundation stones.

This place is mostly peaceful, making it hard to believe these gently rolling hills were once soaked with blood. Both sides suffered significant casualties here – hundreds  died in the first battle alone.

From the area around the farmhouse and cemetery, you can look out over a valley, now cut through by a highway. Sounds of traffic waft up the hill and an occasional siren in the distance reminds you that time marches on and that life continues to move forward even as the past hangs heavy over this land.

I also stood in the shadow of Stonewall Jackson, contemplating the role of Confederate monuments in this country. I had toured his Winchester headquarters just the day before during a visit to Old Town.

As I walked the empty battlefield, my mind’s eye was incapable of picturing the horrors that went on here and I am grateful that I couldn’t imagine it.

This is the kind of place where you can spend as much or as little time as you like. I was perfectly happy to just walk around a bit and study the visitors’ center materials. There were other places to go that day and I lacked the mental energy to delve deeper into the tragedy this land has seen.

I’m glad that I went but was even happier to have something more carefree to enjoy later in the day. You can read all about that fun afternoon here.

Tomorrow we’ll continue our journey down the road and I promise it will be a happier  story. 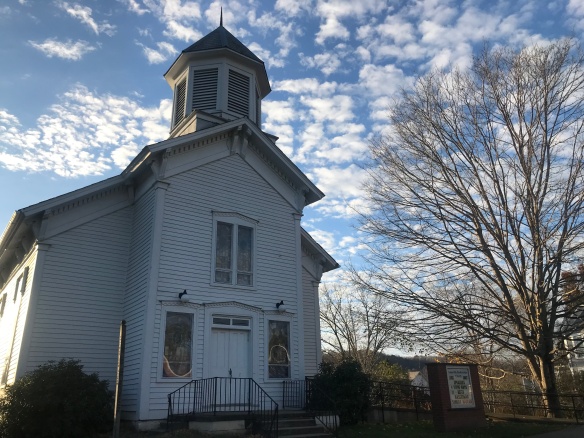 Old churches, cemeteries and barns are my favorite places to find on my journeys. I never tire of reading headstones in old cemeteries or of admiring stained glass in otherwise simple churches.

Just a block or two off Rt. 550 in Amesville, Ohio you’ll find this pretty little Presbyterian Church. I love every part of it – the steeple, those lights, the windows – it’s all lovely. 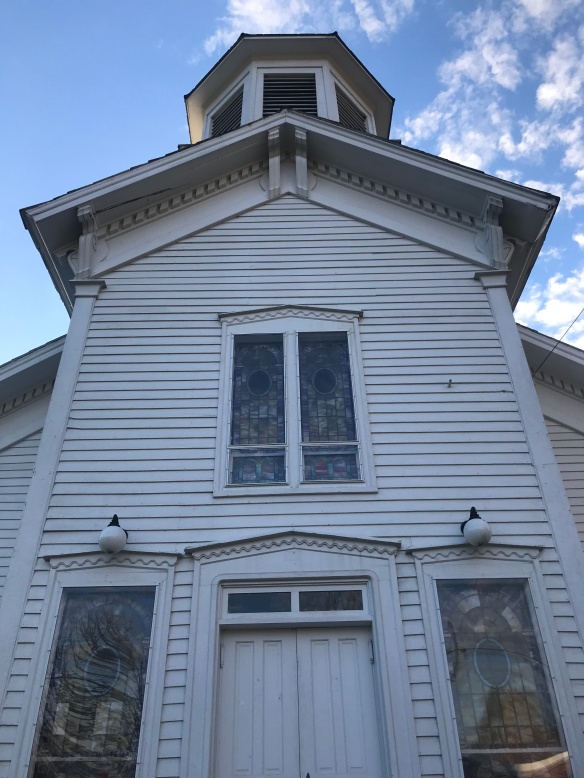 This image makes me reach for my atlas. It’s from a delightful road trip where I spent a morning chasing the sunrise and capturing pictures of old barns, pretty fields and cool signage. I had a destination but all day to get there and no pressure at all.

It was the best day.

This road beckons to me and makes me yearn to pack my bag and set out for some adventure. That sounds great but I better go to work if I hope to have money for more travels!

Have a great day! 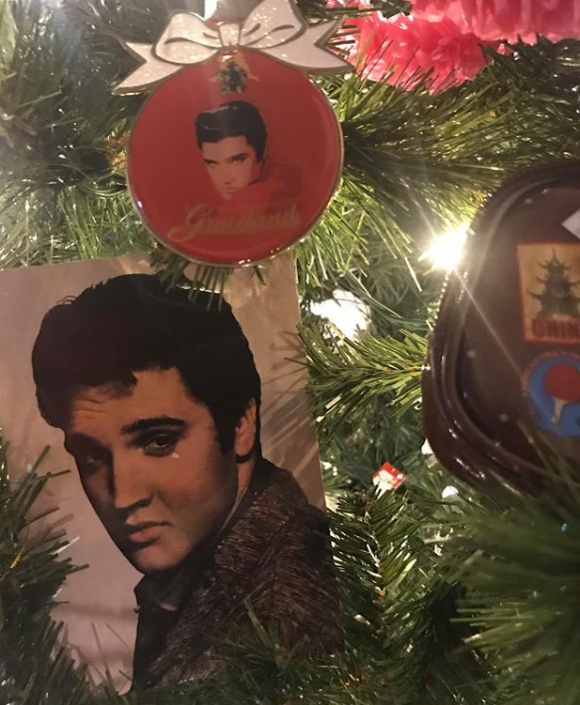 One of my favorite traditions is to collect Christmas ornaments from the amazing places I go in this world. Each ornament gets its own postcard or tag with a trip memory written on the back. Then both the ornament and memory are displayed on a tree devoted only to my travels.

Sometimes the ornaments are actual Christmas ornaments. More often than not, they’re things that I purpose into an ornament.

A stuffed buffalo from Antelope Island in the Great Salt Lake, a toy plane from the day my dad and I saw the Memphis Belle together (that was our first big adventure just the two of us), a glass sun catcher from a trip to Wytheville, Virginia with my mother and a Canadian flag from Toronto are part of this collection. 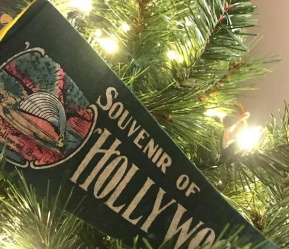 Most items are new but a few are vintage like a souvenir pennant from Hollywood. When I visited back in 2004 I wasn’t collecting ornaments and I recently found this vintage piece in an antique store.

I decorated that tree this week and had a fun time reminiscing about my adventures. It was especially rewarding reliving this year’s fun with friends – Utah with Johnna, Fallingwater with Meria, Pittsburgh with Nichola and Virginia with my mother as well as the solo adventures I had this fall made me smile.

There are a few ornaments that I was careful not to read the tags or think about too much when I pulled them from the tote. Some memories are bittersweet enough they’re best left undisturbed. Maybe next year I’ll be ready.

But this is an overwhelmingly happy tree to decorate and enjoy throughout the season. Seeing the Biltmore decorated for Christmas was a bucket list item that I checked off a few years ago. Memphis is where I paid my respects to Elvis and where I saw BB King play in his club on Beale Street. A vintage toy train reminds me of my solo road trip through rural Indiana while a toy soldier reminds me of the morning I watched the sun rise over the George Rogers Clark Memorial and the tour I had inside the memorial – just me and a National Park Service Ranger. That Hollywood pennant reminds me of one warm Easter Sunday spent at Venice Beach. That was the only Easter I’ve spent away from home. A decorative Santa Claus tells the story of road tripping through Canada and finding the unexpected in Toronto last year.

I’ve never regretted taking a trip or the occasional sacrifice necessary so I can afford to do so. This tree is a testament to why.

Travel enlightens. It reminds us of our place in this world and how small we are. It teaches us about other people, their traditions and values. It gives us a release, an opportunity to escape reality and have fun.

It’s good for us.

I’m already dreaming of the next adventure and wondering what memories I’ll add to the tree next year.

My car needs new tires. I absolutely despise spending time and money on car maintenance but if I’m to continue with all my adventuring I best not be doing it with worn out tires.

My little car has been good to me, taking me everywhere I want to go.  I guess I’ll park it and shell out some bucks so I can keep rolling down the road!

Is there something you need that you absolutely hate spending money on?