No visit to Jamestown, New York would be complete without a stop at the Lucille Ball Desi Arnaz Museum. Here you’ll find recreated sets, original costumes, props, home movies and more. They even have Emmy Awards representing the career of this famous pair and the show that catapulted them to television infamy.

I had studied up a good bit before going, making this less a road trip and more of a pilgrimage to pay my respects to Lucille Ball, the comedian who the writers of I Love Lucy said would do anything for a laugh.

Consequently, I was a complete nerd and fan girl over nearly every little thing. Mind you, it’s not a large museum but it’s well done and thorough enough.

There are some striking visuals and films to tell the narrative of their lives. 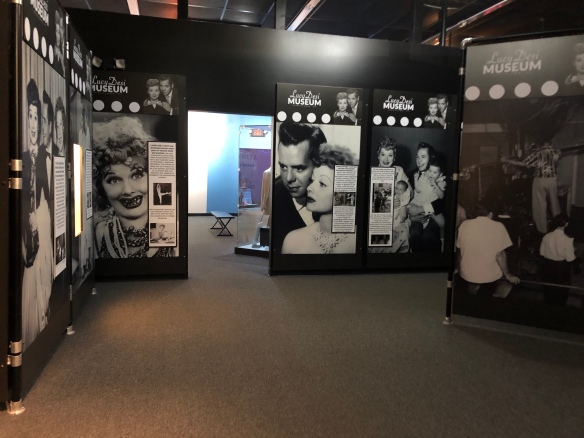 Then there was Lucille Ball’s 1972 Mercedes Benz.

Plus the saxophone she learned to play for the show and the burlap dress Ricky had made for Lucy in Paris.

One of my favorite features was the home movies of Lucy and Desi when they were young and happy. The marriage didn’t end well so it’s nice to think they were happy at one time.

They relate some of Desi’s story too. He was born into a family of political power and wealth – his father was mayor of his hometown and his mother was a Bacardi Rum heiress. Political upheaval forced them to flee and start a new life in this country where he faced racism while building an empire and influencing the future of television.

I also especially enjoyed the recreated sets of their New York apartment and the Hollywood Hotel where the Ricardos stayed while Ricky was filming a movie.

In all, I thoroughly enjoyed the experience here. Because this was the most important thing I wanted to do in Jamestown, I bought my ticket online before I left and arrived when they first opened at 10 a.m. to avoid any crowds. Turns out, there was no crowd at all – just me and a handful of others who seemed happy to wear their masks, use the hand sanitizer provided and stay away from others.

Want to visit? Learn more at the museum website. While in town, don’t forget to do the whole Lucytown driving tour. Learn a little more about that here.