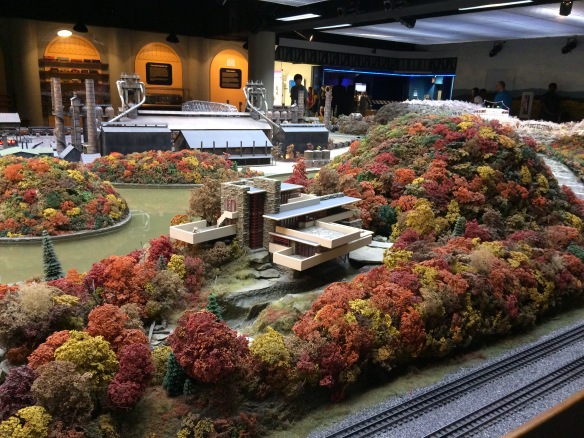 My Pittsburgh pal Nichola knows her city inside and out. She also knows my tastes and put together a fabulous weekend of surprises at every turn – none more delightful than the Miniature Railroad and Village at the Carnegie Science Center.

This exhibit portrays the Pittsburgh area through the years from the 1880s through the 1930s. There are horse drawn vehicles, automobiles, airplanes and trains. There are thousands of fans in the stands at Forbes Field, thousands of trees, countless houses and buildings and even an amusement park complete with animated rides. In fact, the animations here are unbelievable.

The above picture shows their depiction of Frank Lloyd Wright’s landmark Falling Water. The photo below shows some of the biplanes found at a miniature airfield. The light in this picture is a little odd because the lighting in the room changes every few minutes, simulating sunrise to sunset to nightime and back to daylight allowing visitors to appreciate the stunning details in the daylight but also the magnificent glow of the night lighting as well.

I loved the scene depicted below. It shows downtown Pittsburgh, the Monongahela Incline, some of the city’s famed bridges and numerous landmarks important to the city’s story.

Incidentally, all of this started as a holiday display in the home of a Brookville, PA man named Charles Bowdish. That was in 1919. The display has moved a couple of times since then but the public is lucky that it has been at the Carnegie since 1992.

If you find yourself in Pittsburgh, the Carnegie Science Center is a really special place to pass some time. Earlier this week I told you about a Cold War era submarine that is docked here but the museum also has gemstones, robots and countless other fascinating things to look at besides this model railroad and village.

Want to learn more? Click here to read about the model railroad and explore their site further for more great information including how your kids can have a hands-on experience to learn while having fun!

2 thoughts on “Life In Miniature: Railroad and Village at Carnegie Science Center”