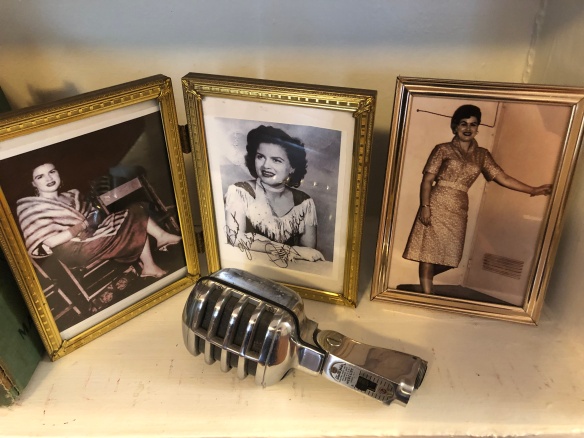 The point of making the five hour trek to Winchester, Virginia was to pay my respects to Patsy Cline. She is buried there and you can visit her home for a modest $8 admission.

People today know her as Patsy Cline, that woman with the smooth voice who is most famous for singing “Crazy.” But she was actually born Virginia “Ginny” Patterson Hensley in Winchester in 1932. Her family moved around a lot throughout her childhood but they lived in this home the longest – for about five years when she was an adolescent and young adult.

They have some items that belonged to Patsy and her family but most things here are simply period appropriate furnishings. They’ve done a fine job creating an atmosphere that feels authentic. In some ways, it feels like you’ve really walked into someone’s home.

I was there for the first tour of the day and that tour consisted of me and two other people so it was an intimate experience. The house was originally a two story log cabin that has been added onto over time. The downstairs tour guide was a delightful British retiree who came to the States as a nanny years ago. She gives off a hippy Mary Poppins vibe and is such a fan of Patsy’s that her enthusiasm is contagious.

The upstairs tour guide is equally delightful and previously ran the local Civil War museum. She is informative, not just about Patsy but about the area as well.

There’s something timeless and sophisticated about Patsy Cline but there’s also something innately vintage and simplistic about her. I think this may be part of the reason she appeals to me so much. That and her silky smooth singing voice that just makes me want to close my eyes and absorb the music.

What I didn’t know was that Patsy really wanted to sing honky tonk music and to yodel. It was Owen Bradley, an architect of the mid-century Nashville sound, who convinced her to embrace the style we know today.

I was also surprised to learn that she played piano by ear. The family owned a piano while they lived in this house and she took some lessons. Her instructor refused to teach her to read music because she didn’t want to ruin the gift that young Ginny so clearly had.

Patsy’s mother was a skilled seamstress who made all of her daughter’s stage costumes. You can see replicas of some costumes and one original on display in the house. Since the house doesn’t have space for proper UV protected display cases, much of the collection is kept in storage while other pieces are displayed at the museum in Nashville.

Truth be told, if you’re interested in the artifacts – the clothes, the handbags, boots and home furnishings – the Nashville museum is the place to be.  If you want to go back to the beginning and to see where her story started to become interesting – in a modest home, square in a middle class neighborhood of a historic town – this place is pretty special.

One of my favorite moments of this tour took place in the living room. They played a recording of Patsy singing “Walking After Midnight” on Arthur Godfrey’s tv show. You get to hear Patsy’s speaking voice as well as a chilling version of this song that I hadn’t heard before.

Patsy’s family sat in this very room and watched her performance on television.  This isn’t an experience you’ll find in a museum.

Following the plane crash that cut short her young life, Patsy was brought home to Winchester for burial in a local cemetery. You can visit her grave if you wish. Sadly, her children were quite young when she passed away. Her son, just two at the time of her death, doesn’t remember her at all and the staff at the house said that he doesn’t understand what the fuss is about. Her daughter, though, has maintained an active role in the telling of her mother’s story, making sure the gifted singer and the music she made are not forgotten.

I’m so glad there are places like this home and the museum in Nashville to keep the music going.

The Winchester-Frederick County Convention and Visitors’ Bureau operates a visitors’ center where they offer a small display about Patsy. The most outstanding piece in this collection is a piano, once owned by the local radio station. Patsy played this piano and posed with it for publicity shots. Someone acquired the piano and donated it to the visitors’ center where you are invited to sit and even play a tune. Had I known, I might have brushed up on a little Patsy tune to play there!

Check back tomorrow as we continue our road trip through Virginia and Maryland!